Hi guys! It’s me again with some news for you. ☺ You know, I never ever won anything. Well, nothing big, at least. Never. Ever. Until now. I won a $100 gift-card from Portillo’s, one of Americas favourite restaurants (= fast food, obviously). I mean, I know it’s not a fancy trip or a car or TV screen, but it is still the biggest thing I’ve ever won, so I’m kind of amazed by that. Well, as I don’t think I will be able to eat $100 of Portillo’s on my own, I am thinking to do some kind of surprise for my students. But I haven’t figured out the details yet, so ‘psht’! It’s a secret.

For a couple of weeks now, I have a new schedule at university. My half-semester Kinesiology and Recreation classes have started, which means, that I basically live at the Recreation Center now. I love it though! I have chosen Aquatic Fitness, Cardio Weight Training and Aerobics, which wonderfully complement each other. Besides varying workout routines, we learn about the basic components of fitness, effects on the body, nutrition details,… The only thing that annoys me is my ankle, which is still recovering and which does not allow me to fully participate in the activities I would like to. And you know me, I’m impatient! So, check out my new class rooms:

Today is Halloween, and I already figured out, it is one of the biggest holidays in the United States. People all ages go crazy, putting lots of effort in costumes and partying all day long. My costume? Well, I went to Walmart about only an hour before the parties started, so there was almost nothing left to choose from. So I had two options: a one-ear fox or a one-paw panda. The other parts were ripped off and not to be found. I almost went for the one-ear fox, when I suddenly discovered a single paw between the shelves, and so I was a fluffy panda on scary Halloween. Very creative, I know XD.

And this week I celebrated another premiere: I carved my first pumpkin! Yes! Gosh, let me tell you that pumpkin curving is hard work! First of all, they are super heavy, so I almost stumbled when I picked mine up to pose for a picture. Second, they are super hard. My biceps still hurts from all the strength I had to put into that pumpkin! Third, their inside is really funny, and maybe not the nicest thing to touch XD. But as soon as I got to the creative part, I was unstoppable. In the heat of the battle I carved both sides of one pumpkin, being amazed and fascinated by this tradition. It is super fun! 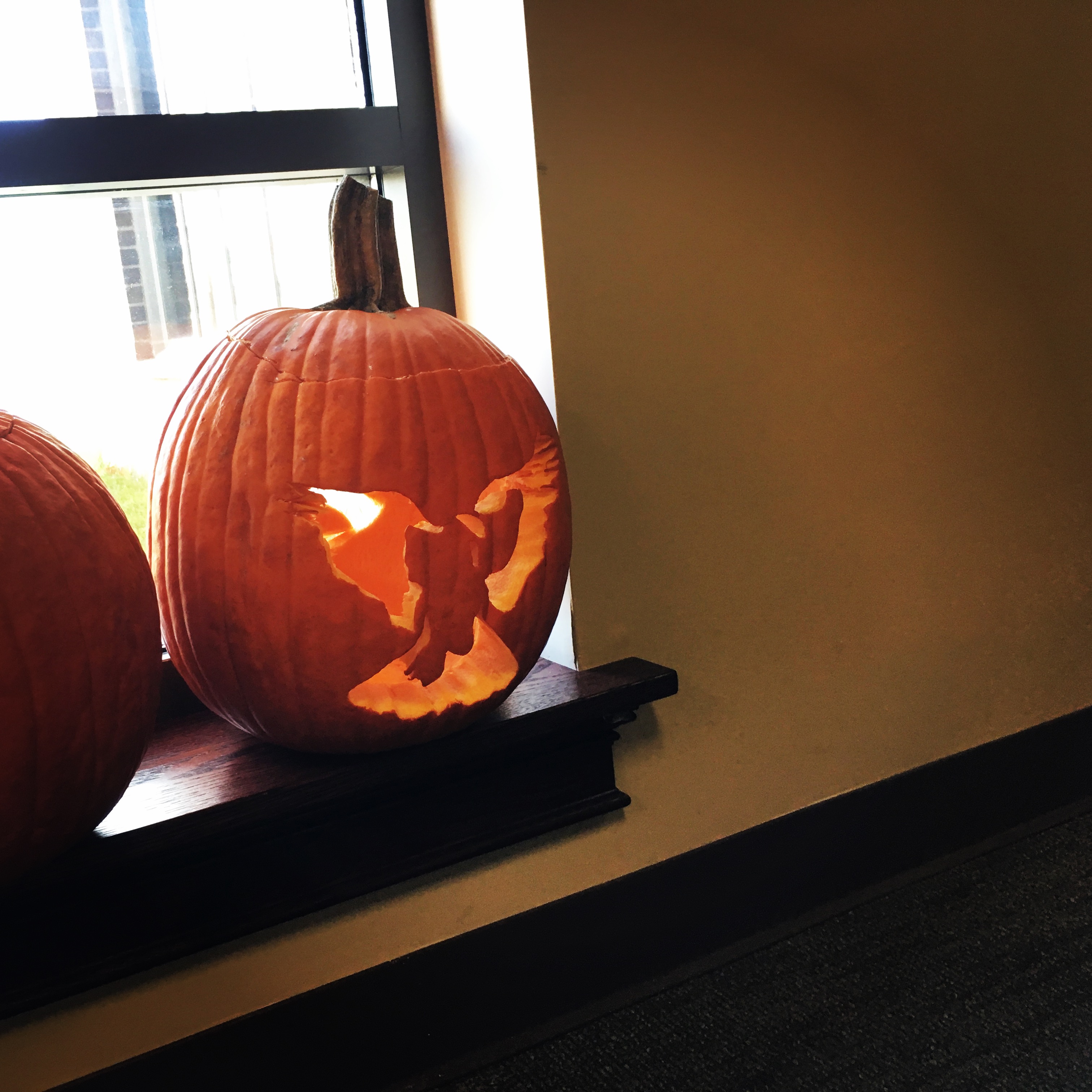 As you see, my pumpkins rather opt for Holyween rather than Halloween, as I am scared of scary faces XD. Actually, this event was hosted by the John Paul II Catholic Newman Center, which is the most wonderful place here in Normal. During my first week in the States I accidentally went by this church, peeked at its name and suddenly there was a picture of Saint John Paul II smiling at me. Next Sunday I decided to check out the Holy Mass, as I live only five minutes away from that place. So I went to see how Americans would celebrate the faith I believe in; in how it is different, in how far similar. And I was shocked by what I experienced. The church was full of young people, mostly ISU students; something I’ve never experienced in Germany. So I came, saw, and decided to stay. People here are amazing, and I just feel so happy to have found a community where I am really feeling home.

What about you? Did anyone of you ever carved a pumpkin? Oh and there is one last thing: As it is Halloween season, there is candy literally everywhere. And I’m trying and trying and trying… but I haven’t found anything that I like, yet. Everything tastes too sweet or too artificial. Anyone any suggestions what to try? I want to find my favourite American candy!
With these words I wish you a sweet week, hoping you are enjoying fall season (We went from 25°C to 2°C in two days :O). Stay warm and cosy, K.